Posted by Brad on 5/14/2012 to New & Future Products
Development of Porsche’s flagship 918 supercar has entered its final stages, if these recent spy photos are anything to go by. This mule, caught wearing very little camouflage - along with attention-grabbing race numbers and stripes - hints at several unconfirmed details of the production model. 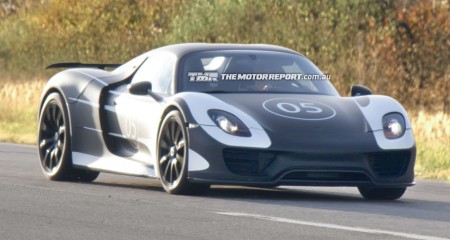 The spied car's styling remains faithful to the Spyder and RSR concepts revealed previously, with the main exception being the exhaust outlets that now exit from above the engine rather than behind the door openings. This suggests that the production car will employ exhaust manifolds that exit within the valley of the V8 engine element of the hybrid drivetrain. 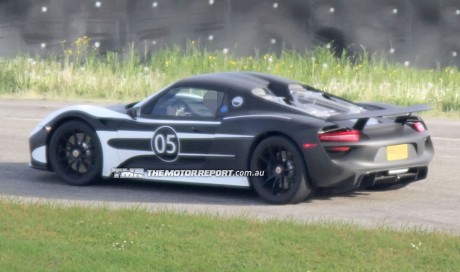 Such a design would assist in the dispersion of exhaust heat, making it easier to cool the lithium-ion battery pack and maximise its efficiency. The mule pictured is also fitted with what appears to be a two-piece removable hardtop, marking a compromise between the open-top Spyder and fixed-roof RSR concepts.

Other road-car realities include conventional door handles and rear-view mirrors in place of the concepts’ rearward-facing cameras – along with additional cooling ducts behind the front wheelarches.

The prototype’s headlight design remains true to the concepts, however the taillights fitted appear to be cobbled up 991 units, hinting at a unique design for the production items. Like the Spyder concept, the rear wing appears to be retractable, although with its uprights mounted further apart for added strength.

Porsche has confirmed that the production car’s plug-in hybrid drivetrain will utilise a new 4.6 litre V8 engine and two electric motors fed by a lithium-ion battery pack, but remains mum on any final output or performance figures. Expectations are of sub three-second 0-100km/h acceleration and 320km/h-plus top speeds, while also capable of travelling 25km on electric power alone.

The production 918 is expected to be officially unveiled at next year’s Frankfurt Motor Show, with total production aptly limited to just 918 examples.
Source: TMR
Previous Post
Next Post
Quick View